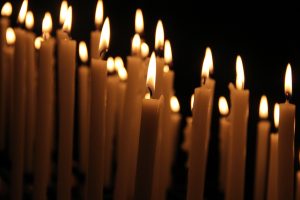 Jesus bids us shine with a clear, pure light,
Like a little candle burning in the night;
In this world of darkness, we must shine,
You in your small corner, and I in mine

Well, one candle does not give off much light and the further away it is from other candles the less the area around it is illuminated. To actually be able to do things, even things like tying shoe laces, you need to have several candles fairly close together.

The thing is the specialised group functioning on its own may well be doing its utmost to tackle the darkness where it is but without other groups around shining on similar topics it is really not much use. I know the wisdom of doing one thing and only one thing well but it does not work like that. To be effective in civic culture the group needs to do a number of things including:

What is more, as these are shared by all groups they lead to duplication.

Now we have some meta-institutions but they are sector based. Voluntary Action Sheffield (VAS) probably has the widest brief. It states it role as:

This can cover things such a churches, tenants groups as well as charities. It aims to link volunteers to such groups. They “provide particular support with legal matters, accountancy, payroll, HR advice, IT consultancy, CRM software, fundraising, development and enterprise.”

However, let’s say you wanted to join a writers group. It is no good going to VAS. Indeed there is not at the moment any organisation that has a list of groups. My suggestions would be to look for a writing class with the WEA and select the most appropriate of those or wait for Off the Shelf where a number of groups showcase their work.  Then you could look out for readings such as Writers in the Bath or the Gauntlet. The only snag with that is that you need to be part of the writing scene to find out what is happening and the best way to be part of the scene is to be in a writing group. Now, this is particularly bad at present as there used to be a group called Writing Yorkshire that had an overarching brief. It closed a year ago.

So what we have at the moment is a third sector where we have volunteer groups who do charitable work set up in their corner, interest groups setting up their corners and professional bodies such as  Med-Chi or Statistics Activity Network each in their own corner. I could add campaign groups, political parties and trades unions. There are synergies between groups. The problem is to create something similar to Sheffield Chamber of Commerce but focussed on the Civic Sector rather than the commercial and with an added brief to foster relationships across sub-sectors of the brief.

This is necessary because at present the cohesion relies on a small number of people who belong or support a wide range of groups. These individuals are capable when they want to, of pulling together a number of different groups. Far more importantly they are able to put people in contact with each other. The more such people there are the healthier and more coherent a civic culture is. If I were to play with the idea I would base it around a monthly meeting but with a four-month rotation: one month would have a purely  social event, another a talk on an area of interest, a training and the finally may be a sub-sector introduction with a speed dating element even maybe crossing over with the chamber of commerce.