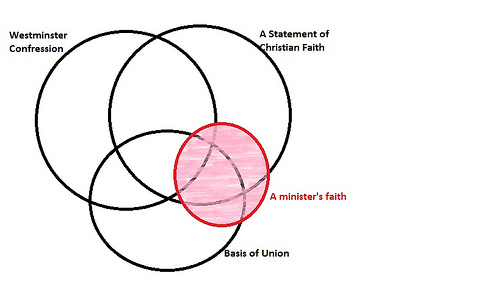 There is one thing every one should spot I have so far and will continue to do so, use the term Subordinate Standards. They are Subordinate to scripture. The Protestant shout of “Sola Scriptura” means that practically they never ever have been the final statement on the faith. Doctrine can and is Reformed in order to bring it better in line with Scripture. This is alive and kicking in Reformed Churches. I can remember being asked how a hymn of Kathy Galloways could get into Church of Scotland hymn book where it would struggle with its feminist images into an Anglican one. The answer was simple, the images Kathy used were Biblical, therefore the question was not “Are these images feminist?” but “Are these images Biblical?” and if they are then they trump all questions about whether things were feminist or not. Many Subordinate Statements say exactly that.

Secondly Subordinate Standards are about where the faith has been. Have a look at Reformed Presbytery of North America’s list and really go down them. You will find an odd bunch of documents. There are the standards such as: the Apostles Creed and the Westminster Confession, but then look what else is there like: Metrical Psalms and the Acts of General Assembly of the Church of Scotland betweeh specific dates! This does not look to me like a group trying to specify Doctrine it looks far more like a list of documents they tell where the group has come from. To ask who we are is nearly always to ask who we have been.

The picture I tend to come back to is of cairns, they normally come from places where the originating group for some reasons feels that it is a good idea to make a statement about how they see the faith. The reasons can be various; I am almost certain that the Congregationalists insisted on one when the URC was formed. They did not want any pesky Unitarians getting their hands on any property of the new united church and therefore having a statement was essential (the Unitarians won’t have a statement because that might meanthose troublesome Congregationalist getting their hands on the property). I think it is instructive that the requirement in the United Church of Canada to become a member is that you assent to belief in the Trinity (not the incarnation or ressurection) and this was insisted on by Congregationalists. The memories of fights in church history die hard. However it has to be said that fresh statements at the creation of a merged denomination are common. They equally occur at times of crisis, points of turmoil and not always theological, quite a few of them are political. However most of the time we plod along with those we have got and don’t pay much heed to getting new ones.

A while ago I drew two pictures of what we would mean if we required a ministers faith to be in substantial agreement with the subordinate standards. I suggested the URC’s approach was like the diagram shown here. I would suspect quite a overlap with the Basis of Union, maybe with quite a bit of agnosticism about parts of it, with other bits being inconcurrence with other Subordinate Standards which we accept. In other words the tradition is defined by having a broad scope with many overlapping subordinate standards and the requirement is that the faith falls mainly within those parameters. It does not mean that all ministers sign up to the same things exactly. Indeed although I have shown three here, there are at least another six named subordinate standards. I defy anyone to know them well enough that they can recall them at an instance and say what they agree and disagree with them let alone accept them all. Then there are the ones we don’t name but are included as “of the tradition” e.g. the Scots Confession. However what status is John Robinsons address to the Pilgrim Fathers at Plymouth.  You won’t find it on the internet, I might put it up at some stage if I get hold of it, but the paraphrase in the form of We limit not the Truth of God (ignore the tune) is widely sung in the URC and I have heard quoted in theological debate. There is thus a deliberate ambiguity.

Yes I use the subordinate standards, they have been an important vehicle of my initiation into Reformed Theology, but I do not use them in a sort of lets try to believe twenty impossible things before breakfast style. I usually read them through quite quickly the first time, to try to get a feel of them, what is important and how they stand. Then and this is an ongoing process I turn to bits I see as significant and try and work out why. It maybe I disagree with them, in which case I need to work out why, or it might be a phrase gives me cause for reflection, time to look deeper at other understandings. So Subordinate standards are there to say where we have been, not to determine who we are. Remember “Those who cannot remember the past are condemned to repeat it” (George Sanayana) so we need methods of remembering where we have been and knowing why we have travelled to where we are.

6 thoughts on “Standards, we have got to have Standards”